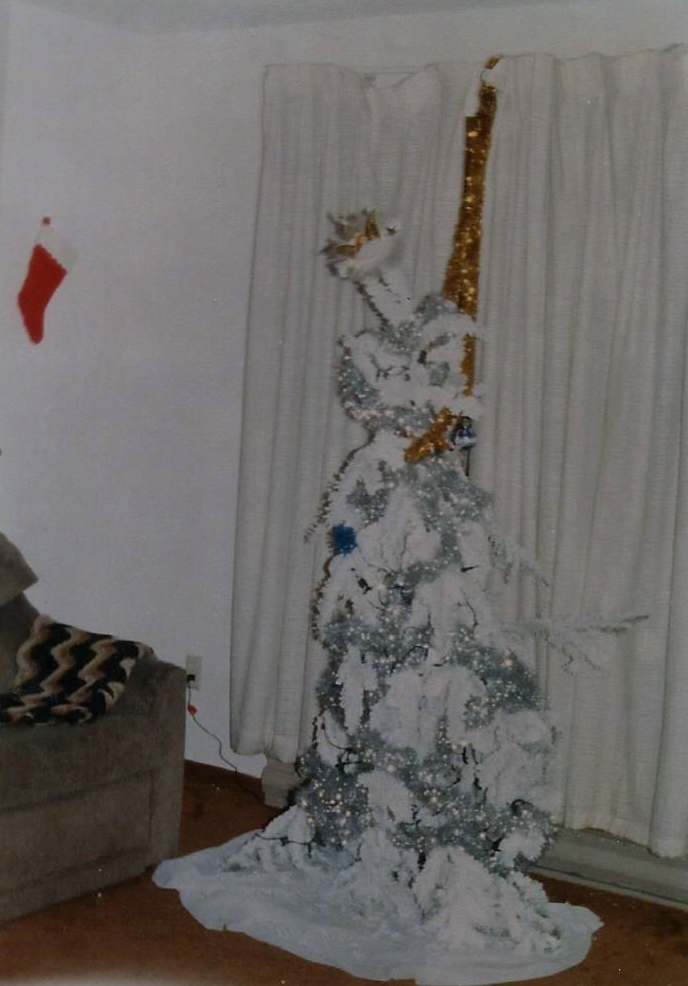 One memorable Christmas I felt in charge. My son spent the holiday with his father. No one would deter me from the picture-perfect Christmas tree.

Every time I mentioned a flocked tree with blue lights, my ex-husband or son frowned or stuck out their tongues and stuck a finger towards their throats. I almost abandoned the idea. Well, I planned to have my way this time! Only Shadow, my son’s black cat, wouldn’t object. Why should she mind?

I borrowed Dad’s station wagon and headed to the tree lot. On a crisp December Saturday about dusk, I read the sign, “Trees from Montana.” Banished, the netted un-flocked trees leaned against the building outside. Who cared about them? The lot displayed the rest of the trees inside the building.

The flocked trees stood tall in their stands. Good. My selection became easier. I walked all the way around each tree. I wandered around the warehouse and imagined I was in the Montana woods tromping through snow to pick out the exact right evergreen with imitation snow lying on the branches.

However, during my inspection, I easily noticed flaws. I picked out a beautiful Scotch pine. The one bare spot would go against the wall, or in my case, the window. However, $45? Ridiculous!

Occasionally, we picked out our own tree in both the South Dakota and Montana woods. A cutting permit cost only $5 for the national forests. So $45, flocked or not, sounded exorbitant.

Not the round conical Scotch pine, but a smaller, six-foot flocked evergreen cost $25. Glad I’d bargained for one in a metal stand, I didn’t worry about struggling to position the tree in a stand by myself. The salesman took my check and loaded the tree into the back end of the station wagon.

I carried the evergreen in the house and cleared space in front of the picture window. Yep, like many people I rearranged my home just to make room for a tree once per year.

When I dug out the decorations, I found some silver tinsel garland and a couple of crystal and blue balls. A good start, but, I hadn’t yet bought any blue lights. I knew the rules. The lights go on first. I postponed decorating until Sunday evening, because I didn’t feel like driving the seven miles back into Rapid City. No problem to wait one more day. Then I vacuumed up the flocking on the stairs and living room carpet. I’ll vacuum out the station wagon too before I return it tomorrow.

The next day I stopped at a shopping center and found some blue lights – 100 miniature ones. I searched for more blue balls but none available to my liking. My dream rules said royal blue or blue and silver. I needed to begin collecting blue decorations for future trees for my new tradition.

I wrapped the lights around the tree and draped them back and forth mostly on the living room side. Since the flocking continued to shed, I examined the tree skirts in the Christmas box. The red-and-green quilted one I had made wouldn’t work. An ivory sheet wouldn’t match. So I used an unhemmed white lacey one.

Next I draped the silver tinsel garland around the tree. I stood back to admire my work. My dream became a reality. However, the crystal decorations didn’t show up against the white flocking but reflected once I positioned them by a blue light. I found only two blue balls, a white one and a silver painted pine cone. I planned to continue buying more suitable decorations. How many years did Mom collect hers?

My favorite red-haired angel immerged from a white cloud, and she wore a blue dress. I wished her golden wings and the star were silver. She’d do for now. When I placed her, the top branch tipped with her weight. “You’ve gained a pound or two,” I teased her. Even telling her to “straighten up and fly right” didn’t help. I finally gave up my attempts. I surveyed the results and smiled, pleased, considering everything. I unplugged the lights and went to bed.

Monday morning, I walked down the hall to the living room. My beautiful tree lay on the floor. Decorations hung askew and bits of flocking scattered several feet. I picked the tree up and resisted the urge to shake some sense into it.

Perhaps I shouldn’t arrange decorations on three sides of the tree. This probably added to the balance problem. After straightening and rearranging the bulbs and balls everything appeared better. I backed up to check. Since it stood upright, I brushed the flocking off my clothes and left for work. No time to vacuum any flocking off the floor.

When I arrived home the tree again lay on the floor. I attempted rebalancing bulbs. After the fall, all the weight had shifted to one side. That darn tree wasn’t going to stay up. Tears didn’t help. So, I wiped them on my sleeve and searched the house for a rope. I didn’t find one.

A glittering gold tinsel garland peeked out of the Christmas box. I planned how to tie the tree to the curtain rod. I made a golden noose and strung it up. The angel tipped her branch further forward. I repositioned her, but gave up. More and more flocking dropped around the tree. I stood back, hands on my hips and dared anything to move.

Shadow took the challenge, circled the tree, jumped up on the stereo stand pulled some flocking off with her teeth and spit white gunk on the carpet! I couldn’t believe the gall! I spanked her. In response, she moved a branch out of her way and jumped up to the window ledge. The tree stopped trembling and lost a bit more flocking, but the gallows held fast.

Oh, well, Christmas is only two weeks away. Soon this tree will be history. Next challenge? Where do I find blue wrapping paper and silver bows?