MOM, YOU PRESENTED YOURSELF IN SO MANY LOVING WAYS.

AS A DAUGHTER AND SISTER

WITHIN AN EXTENDED FAMILY

AS JIM’S AND MY MOTHER

AS A BROWNIE AND GIRL SCOUT LEADER

AS A QUILTER, INSTRUCTOR, AND PIONEER QUILT SHOP OWNER

AS MY SONS’ GRANDMOTHER

My husband Rob said, “Look! I found us some ‘Happy Eggs.'”

I rubbed my eyes and looked at the package. Then smiled. “How happy are they?”

“I caught them dancing in the ‘frig.”

I chuckled. “What kind of dance? Oh, let me guess. Was it the chicken dance?”

“Ya.” He tucked his hands under his armpits and flapped his ‘wings,’ squatted, wiggled his bottom, and tried to remember the iconic wedding reception fun dance.

My eyes widened as I stared and then joined him.

I hadn’t taken time to even clean my glasses yet. “I think we’ve been cooped up too long.”

I hugged him good morning with a little peck on the cheek.

Good Saturday morning to all you happy folks out there who are making due during this extended COVID-19 isolation. I hope our cracked humor gave you a little smile or maybe a groan at its ridiculousness.

I want to share a poem with you that concerns the historic virus known as the Spanish Flu. My grandfather, Orion Wyant Swinehart (b. 1896-d. 1983), was in the thick of that virus. My poem parallels his life during that time with the events of the H1N1 virus history. The indented stanzas of my poem involve his life. The left-margined stanzas contain snippets of the national events from a century ago as well as current statistics. I list my resources after the poem.

I’ve been encouraged with some news reports providing survival statistics. I’m especially happy when good news reaches me about my friends, acquaintances, and family. Unfortunately, the bad news of the infection and mortality rates seem to outweigh those upbeat stories. While reviewing this history in my personal life and writing the following poem I became more hopeful for the future. Maybe this poem will encourage others to reach for endurance. Please be safe, healthy, and find your happiness.

My Resources: In writing this poem I used a family story my mother repeated to me that my grandfather was sent home from the Army due to the Spanish Flu. I also learned more from reviewing his memoir My Life Story by O.W. Swinehart written in February 1973. It was included in my mother Evelyn Mae (Swinehart) Rose’s memoir In Retrospect A Family History printed in 2004. Her book is preserved by the Rapid City Genealogical Society and saved in the Genealogy section of the Rapid City Main Public Library, South Dakota. I located records of Grandpa’s WWI registration card and an index card from the U.S. Veterans Bureau confirming his service dates.

I also learned history about the H1N1 virus and certain events by researching the following online resources:

Prayers to our maker;

Allegiance to the nation;

I wrote the above acrostic poem in 2002. The message still feels appropriate for 2020. What is an acrostic? If you read the first letter of each line vertically I spelled PATRIOT. I bolded to help you spot the letters. “Patriot” has been published in my religious-inspired chapbook God, My Greatest Love and also in my full collection Pastiche of Poetry, Volume II. Both are available at your favorite online outlets. God, My Greatest Love is currently on special with Amazon for $2.90 paperback and $4.99 for Kindle. The chapbook may make a nice gift to a Sunday school teacher, a favorite aunt, or a special friend.

Today more than ever I’m thinking about the patriotism in our nation. Is it stronger or weaker after the election? I don’t wish to get into the politics of who won or were the votes counted appropriately. You hear enough about that on the news channels.

Instead, I’m sharing what I pray each day. “Father, Son, Holy Ghost, Mother Mary, Angels and Spiritual Guides who are around us now and always, I pray that You will help our leaders make the best decisions for our wellbeing in accordance with Your will for the Highest Good of our nation, our inhabitants, and the world we share.”

Obviously, I’m a Christian. However, I recognize there are other religions that pray to a similarly benevolent entity with another name. If you want to change this prayer to fit your religion, I ask that you at least say something like:

“I pray that You will help our leaders make the best decisions for our wellbeing in accordance with Your will for the Highest Good of our nation, our inhabitants, and the world we share.”

Thank you for your caring spirit.

One of my favorite Thanksgiving memories happened in 1974. My husband and our 2 sons – Scott and Erik – traveled to Rapid City, SD to my parent’s home.

The traditional meal was over for most all of us. Mom served our traditional fare – turkey with dressing, potatoes and gravy, sweet potatoes with melted marshmallows, hot rolls with butter, salad, pickles, olives, some green beans, vegetables, pumpkin pie with whipped cream. You probably recognize this fare with your own traditional table.

While I helped clear the table I noticed my 2- 1/2-year-old Erik still sat at the table with a smudge of whipped cream on his nose and upper lip. He grinned from ear to ear as he stared at all the food still in front of him. Sigh after satisfied sigh escaped from his lips. He seemed to just be savoring every eyeful of such a feast.

I’m forever grateful for those 2-1/2-years when I experienced this happy-go-lucky daredevil little boy. I know he’s in heaven, but I always miss him especially this time of year. I’m also grateful that my son Scott stayed with me to watch out for me on earth while Erik is far away.

Here’s the poem I published in my Pastiche of Poetry book, Volume II

Erik sat at the end

of the six-foot dining table addition.

Whipped cream was out of tongue reach

on his chubby cheek.

catalogued all the dishes:

He sighed, took a deep breath,

His tummy was tightly packed.

Everyone else finished and left.

He wouldn’t, or couldn’t, move,

but smiled at the celebration spread,

I hope you will save all your favorite memories of being with family and friends this year whether you are able to be with them due to COVID-19 or if they have passed into another peaceful place.

Land refused to ground them.

from England to Connecticut.

chilled a chinook in Oelrichs.

Poet’s note: In case you didn’t know, I was born and reared in South Dakota. This poem placed first in the South Dakota State Poetry Society’s 39th Annual contest and was published in their Pasque Petals magazine, Fall 2015 edition. I’ve been eyebrows deep in my father’s genealogy. Our ancestors’ stories inspired this poem.

The above quote is attributed to Emily Dickinson. I used her thought as my poem’s theme. The following poem probably falls in the category of Ars Poetica. Some sources say writers should never write about writing. Who wrote that rule?

The South Dakota State Poetry Society (SDSPS) challenged me to write a poem about Writing. The poem won first place in their 39th Annual Contest! Thirty-nine years is a long time to be a respected poetry society. Perhaps they know a thing or two.

Like to write poetry? Go to sdstatepoetrysociety.wordpress.com They are also affiliated with the National Federation of State Poetry Societies (NFSPS). Go to www.nfsps.com to see many opportunities.

So are our readers’ tastes.

My plate is always filled

I aspire to be:

I cannot eat it all.

These nibbles may not fatten my income,

but I enjoy tasting.

My dessert may wait

posthumously or not at all.

I was challenged to write a poem about my zip code. The rules were simple – the first line contains the number of words in the first number, second line the number of words in the second number, etc. My zip code is 37918. So the first line contains three words, second line seven words, then nine words, one word and finally the last line is eight words. My poem totaled 28 words. Of course, your zip code would contain different numbers in each line.

I entered the following poem in the South Dakota Poetry Society (SDSPS) 39th Annual Poetry Contest. SDSPS is an affiliate of the National Federation of State Poetry Societies (NFSPS).  My poem won First Place! Thank you, SDSPS judges. I’m grateful to the Pasque Petals editors for publishing the contest results. I love reading through all the fellow poets’ works.

The SDSP’s blog website is sdstatepoetrysociety.wordpress.com The NFSPS website and links to other affiliated state societies is http://nfsps.com Check out all the opportunities to share your work.

hear child whispers in my ear, enjoy his kisses.

lift high hopes he grows kinder than me.

If you enjoyed this poem, visit www.RoseKlix.com to learn of her poetry and prose collections. 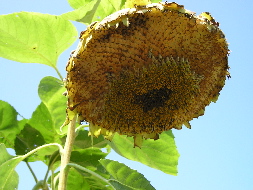 The following poem reminds me when we planted sunflowers in our backyard. I enjoyed their faces turning towards the sun. The stalks grew much larger than we imagined. In the fall the birds were crazy for the seeds. I decided we needed to ration throughout the season. We dried the huge seed heads in the garage and pulled them out one by one. Since then we’ve bought the black sunflower seeds for our feeders. But this hasn’t been near as much fun as watching them pull apart the seed heads.

A gathering of autumn bird

at the cardinal’s feeding tree.

millet and corn on the ground

to mourning doves and

left them gleaning on their own.

to create a feeding frenzy

and envy from the blocked squirrel.

Published as a 39th Annual contest winner in Pasque Petals, The Magazine of the South Dakota Poetry Society, Fall 2015, Volume 89:2